First time in the art history an artist has self- destructed his own painting. The incident happened at an auction at Sotheby’s in London on Friday, October 5.  Banksy, British Graffiti Artist has pulled off yet another trick that grabbed the attention of the art world, this time with the self-destruction of his own work.
Banksy’s painting titled “Girl with Red Balloon” was being auctioned at Sotheby’s in London on Friday. In the painting, a little is depicted extending her arm out for a heart-shaped balloon, which is floating beyond her reach. The painting is spray painted with acrylic colors.
The bidding came to $1.4 million, an amount that tied the artist’s very own auction record from 2008. Right after the hammer pounded to signify the end of the auction, the canvas of the painting began to scroll downward, seeming to pass through its elaborate gilded frame — and reappearing below in neat, vertical strips. Sotheby later explained that a shredder was hidden inside the frame. The crowd started to murmur as they understood what was happening: The canvas was “self-destructing” right in front of their eyes.

“It appears we just got Banksy-ed,” Sotheby’s senior executive Alex Branczik said in an explanation that portrayed the incident as “the first time in auction history that a work of art automatically shredded itself after coming under the hammer.”
“We are busy figuring out what this means in an auction context,” Branczik told the outlet. “The shredding is now part of the integral artwork. We have not experienced a situation where a painting has spontaneously shredded, upon achieving a record for the artist.” Sotheby’s did not uncover who bought the artistic creation.
The incident impelled questions concerning how Banksy had pulled it off and whether he had been at the auction in disguise. 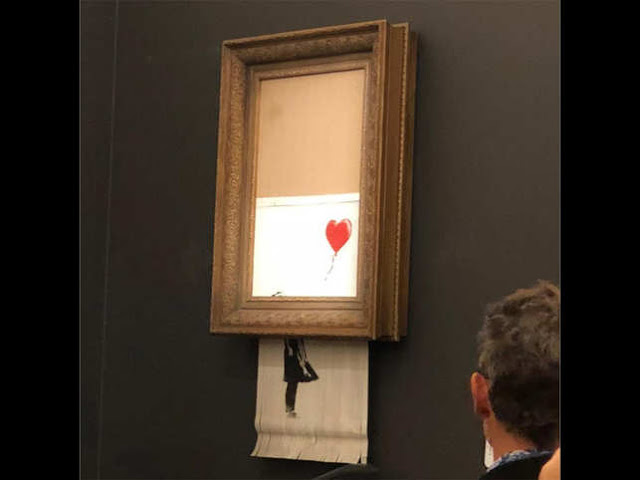 However, Banksy posted a video on Instagram demonstrating by a video of footage of a shredding mechanism being built into a frame for, presumably, “Girl with Red Balloon” on Saturday.
“A few years ago I secretly built a shredder into a painting,” he stated in the video text, “in case it was ever put up for auction …” The clips of Friday’s auction at Sotheby’s can be seen on the video next indicating that Banksy — or someone who works with him — was there when it occurred. The caption of the post on Instagram was. “The urge to destroy is also a creative urge,”.
Banksy has managed to keep his identity a mystery from people in general for a long time — he works usually at night painting the wall with his murals undercover— while building a notoriety for provocative street art with subversive, Anti-establishment messages. 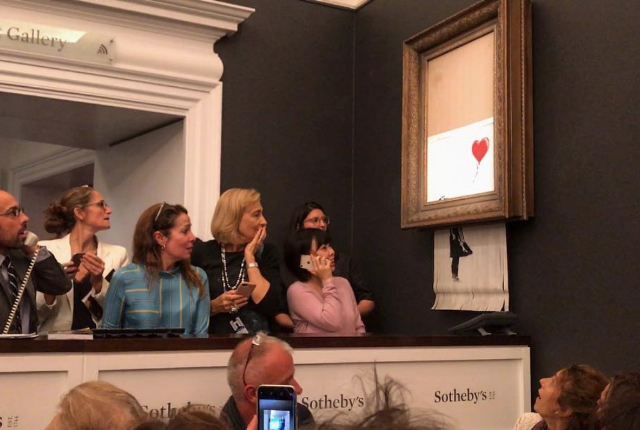 Graffiti art has a hard enough life as it is before you add hedge-fund managers wanting to chop it out and hang it over the fireplace,” the New York Times cited Banksy as saying in 2013. “For the sake of keeping all street art where it belongs, I’d encourage people not to buy anything by anybody, unless it was created for sale in the first place”
“The auction result will only propel this further, and given the media attention this stunt has received, the lucky buyer would see a great return on the [$1.4 million] they paid last night,” Syer the co-founder of the MyArtBroker.com told the daily paper. “This is now part of art history in its shredded state.”
Read About More Topics: