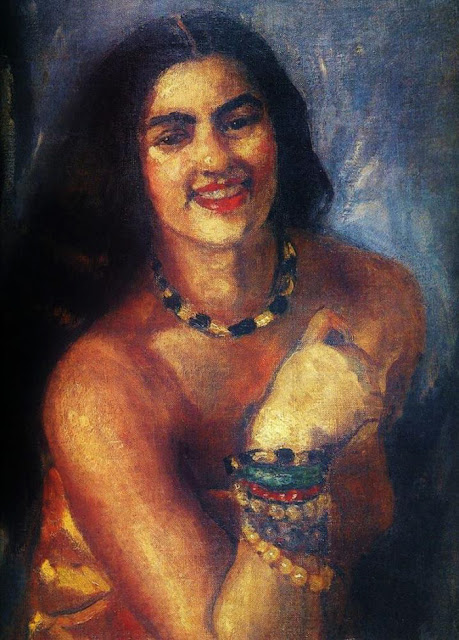 Amrita Sher-Gil was born of a Hungarian mother and a Sikh father. Amrita started drawing and painting in watercolors from the age of five, mainly illustrating Hungarian fairy tales.

At the age of eight, Amrita started lessons in art from one Major Whit marsh. She subsequently attended classes held by Beven Pateman, a fashionable society painter. In 1924 Amrita went to Italy with her mother for a brief period and attended an upper-class school in Florence before returning to India.

According to Vivan Sundaram (her nephew and a well-known painter in his own right), the drawings and watercolors Amrita did between the ages of eleven and fourteen (1924-1927) indicate a growing awareness of herself.

Although by 1927 Amrita had been in India for six years, the people and landscape in her drawings and watercolors are mainly European.

As Vivan Sundaram remarks, in her earlier works Amrita draws with a thin tremulous line, wistful maidens, naked and lost in forests.

In her later works, the characters, particularly the faces of women, seem extremely tense with suppressed emotion.

In 1927, Amrita’s maternal uncle, Ervin Baktay (who started his career as a painter but later became a renowned Indologist), arrived from Hungary and seeing Amrita’s passion for drawing and painting, encouraged her to draw from life models.

This was a new and fruitful experience for Amrita which she later acknowledged when she told him, ‘It is to you I owe my skill in drawing.’
In 1929, at the age of sixteen, Amrita accompanied her parents to Paris for systematic training in art. She painted and drew diligently, initially at the Grand Chaumiere under Pierre Vaillant and later at the Ecole des Beaux-Arts under Lucien Simon.

In the next three years, she made innumerable sketches and studies of male and female nudes, mainly in charcoal.

These studies reveal ‘her extraordinary artistic sensibility to perceive the plasticity of human form even at such a young age.

She emphasized volume by shading and used the ‘energetic sweep of the line’ to create massive forms of figures.

It was around 1930 that Amrita first started working in oils. She produced over sixty paintings—basically studies of models in the nude, besides a few still-life studies and self-portraits.

Significantly, she painted her own self against a flaming red background, perhaps to dramatically assert the individuality of her personality. She was greatly influenced by Cezanne, Gauguin, and Matisse.
In September 1934 Amrita wrote:
“Modern art has led me to the comprehension and appreciation of Indian Modern art has led me to the com French; painting and sculpture. TV-seems paradoxical but I know for certain that had we not come away to Europe, I should, perhaps, never have realized that a fresco from Ajanta or a small piece of sculpture in the Musee Guimet is worth more than the whole Renaissance.”

Haunted by an intense longing for India, Amrita returned back in 1935. During the next six years, before her sudden and tragic demise at the age Of 28, Amrita produced an important body of work.

She was greatly impressed and inspired by the traditional schools of Indian painting, such as Ajanta, and Rajput and Mughal miniatures. She, however, developed her own style, which, though not necessarily Indian in the traditional sense of the word, was ‘fundamentally Indian in spirit’.
Amrita had, by 1939, already developed her last and most mature style in which she executed some superb paintings. To quote Dr. Charles L Fabri: “The India which Amrita Sher-Gil painted was her own familiar country. At the age of nine, she came to live in the village of her uncle. And what she saw there impressed her more than anything else—the peasants with their sad .faces, with their dreamy lost look, the slow swaying gait. The peasants were not strange, odd creatures of another exotic world, but her own sisters and brothers… In her whole artistic ‘oeuvre’, Amrita Sher-Gil never painted a single Indian in action, running or gesticulating or dancing or rejoicing. All her figures are like her huge elephants or buffaloes—lazily lounging or placidly moving with gentle steps. Great dead walls, large, static trees add to the static peace and breathless silence of her work.”
Although many artists were rather skeptical about her art, she did receive a sympathetic response from critics like Karl Khandalavala, Herman Goetz, Charles Fabri, and Mulk Raj Anand. The distortion of figures in her art was cited as an instance of her inadequate drawing and ignorance of the Indian tradition.

But after her close study of Ajanta paintings, she had no problem in understanding that the Indian artist used figures not as an end but as a creative means.

She therefore successfully blended the Paris experience with the Indian. It was the study of modern art that led Amrita to the understanding and appreciation of the traditional Indian painting and sculpture.

Karl Khandalavala opined that Amrita’s art was a reaction against the Bengal School. Mulk Raj Anand considered her, ‘a genius of the first rank, one of the first of the few Indian painters to give a new direction to the art of our country.’

He admired her great talent in the organization of form and color with a contemporary sensibility. P R Ramachandra Rao thought that the striving for simplicity of forms in her paintings had all the ‘vitality of primitive art’.

KG Subramanyan remarked on the simultaneous juxtaposition of sensual delight and concern for poverty in her work.

Nevertheless, despite varying opinions about her work, there is no doubt that she was an extremely sensitive and emotional personality and possessed an extraordinary talent.

As N Bhuvanendran aptly remarked: She was a one-person crusader against academic realism on the one hand and revivalism on the other. Therefore, she felt the need to spell out her views on the absurdity of realism and the futility of slavishly imitating the mannerism of the art of the past. She lashes against the academic realists for their belief that the function of art is to reproduce objects faithfully without knowing that such a ‘cretinous’ and servile imitation is, in fact, an admission of the impotence of art. She had little difficulty in understanding that the copy, however, faithful it may be, will always be inferior to the original. Her biggest complaint against academic realism was its delimitation of the functions of art. The function of art is to liberate the imagination, not to shackle it. She has more reasons to find fault with academic realists because of modeling their art after the fifth-rate Western art. It is a testimony to her critical acumen that she wrote: ‘Compared to the best specimens of it, the worst samples of the Bengal School are works of genius.”

In all her compositions Amrita shows her great ability in ordering spaces with an absolutely clear vision.

All her compositions are wonderfully arranged in the given frame, leaving empty spaces just sufficient for the eye to rest upon, yet making the central subject of the painting prominent enough.

Such an inherent quality is reflected even in some of her earlier watercolors painted as a young girl, wherein the disposition of the figures is shown against a peaceful open space.

In Amrita Sher-Gil‘s six brief years of pictorial activity in India, her work created a new and vital artistic significance.

The blood, both of the East and the West running in her veins, made it natural for her to want to bridge the artistic vision of the West and that of India.

Infusing the traditional and the modern she became a milestone in the history of modern Indian painting.

‘Standing at the crucial period of Indian art she displayed a discernment uncommon in a person of her age to prophesy the trend of world art and note the points of confluence between Eastern and Western art.’