A Ramachandran is essentially a figurative painter whose point of departure is the idea, attitude towards things and people, the content of all kinds, not excluding story content.

His earlier paintings of the 1960s and 1970s such as Indian Resurrection, Encounter, The Chase, Christian Themes, Machine, Kali Puja, Nuclear Raginis and The End of Yadavas are a portrayal of the social ambiance of the time, in highly grotesque images in apocalyptic visions.

His later works of the 1980s and the early 1990’s like Yayati—a stupendous mural-like painting, measuring 7 feet by 60 feet, exhibited in 1986 at New Delhi—and his series of paintings entitled Urvashi, Pururavas and the Lotus Pond, however, are realized as universal symbols emerging from his subjective being, independent of a connection with any particular epoch of history or any socio-political situation. 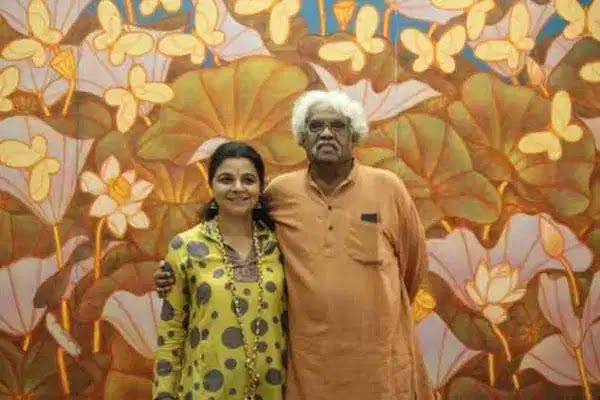 These works are an expression of emotionally charged sensation. Seeking inspiration from his antecedents, the imagery from the life of a tribal society, and the stylistic element from Kerala temple murals, the outcome is a series of highly accomplished paintings depicting images of enticing and lusty females emerging from his own consciousness. 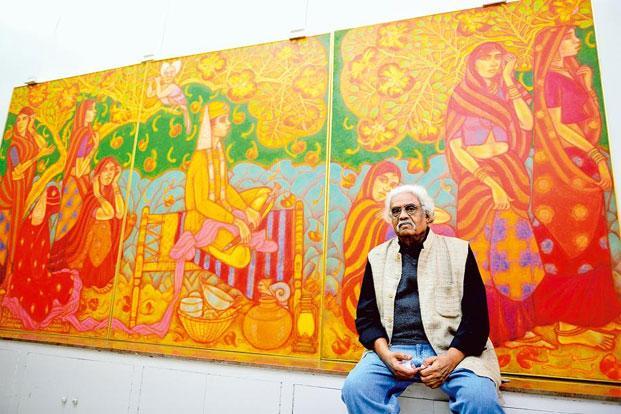 Ramachandran has evolved from a grotesque realism and fragmented forms with social connotations to nurture ideals of classical Indian painting and the concept of beauty of human form; from academic realism with notions of perspective and chiaroscuro to allegorical form an arbitrary light and shade.

There is no attempt at creating depth in space. The figures, in fact, stand out like a high relief as if advancing towards the spectator. Space is filled in by numerous motifs and ornamental patterns. And the colors operate in a purely functional relationship to create an extraordinary sensual appeal.

IN CONVERSATION – A. RAMACHANDRAN

In his recent totem-like sculptures in bronze, Ramachandran has successfully experimented to fuse his aesthetic and technical objectives for integrating the two-dimensional stylistic elements, characteristic of his paintings and drawings into three-dimensional media of sculpture in quite an innovative manner.

The landscape has become a part of the human form itself. It is, as if, the body itself is dressed in, or if one may say, is wrapped up in the forms of flora and fauna.

A Ramachandran Work As A Contemporary Artist:Watch Video

The process of Ramachandran’s artistic development, simply, is a reintegration of art and experience. For, the tumultuous and the fragmentary impressions of his sensibility has formed a new central point in his mind on which they have converged and taken the shape of a new vision—a vision of startling symbols of life and dream.
Artists:
1. Leonardo Da Vinci  2. George Keyt  3. Andy Warhol