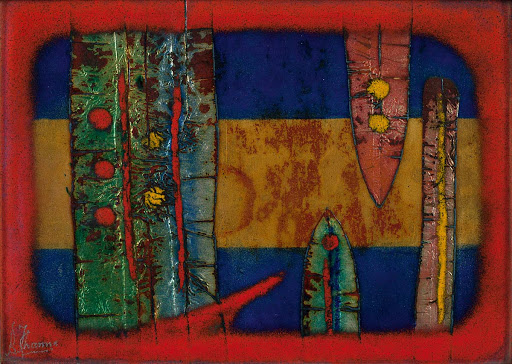 Bishamber Khanna is, perhaps, the only artist India to pursue the ancient art of enamelling for an individual painterly creative expression.

Enamelling probably originated in Western Asia and was used in ancient times to decorate pottery. The Greeks, in the fifth century BC, seem to have been the first to fuse enamel on metal, the form in which we know the art today.

In the course of history many peoples, in the West and the Far East, produced distinguished work in varying techniques such as cloisonne, champleve, base taille, Limoges and grisaille.

In India, the tradition of enamelling, though only a few centuries old, has mainly been in the embellishing of articles of jewellery in the champleve process.

In more modern times, an influential movement originated in Vienna around 1929, and more recently artists and craftsmen the world over, particularly in the USA and France, have revived the art of enamelling for individual creative application.

Today enamelling is not confined only to small ornaments or objects like ashtrays, bowls and plates, but is used to create impressive large panels and screens for interior and exterior decoration for contemporary homes and buildings.

Bishamber, experimenting with a painstaking technique for over two decades, has discovered the infinite aesthetic scope of the enamel medium.

Controlled form and colour are cleverly combined with accidental effects of vaporous forms and colours created in the process of firing at temperatures ranging from 1400’F to 1600’F, in two to four min- utes.

He essentially follows the sifting and stencil method, but works in mixed techniques including raising, fabrication of sheet, collaging of metal shapes, brazing and welding, occasionally using wet inlay technique and also lustres for special effects.

The abstract compositions, designed in a contemporary approach, are enjoyable for their form, design and colour values creating an effect of calm and serenity.

Besides the innumerable small-sized enamel paintings, Bishamber has created enamel panels to architectural scale and concept.

These works in textured, hammered, patinated and enamelled copper, both for interior and exterior murals are an expression of his faith in the great possibilities for significant aesthetic statements in the medium.
Artists:
1. Leonardo Da Vinci  2. George Keyt  3. Andy Warhol