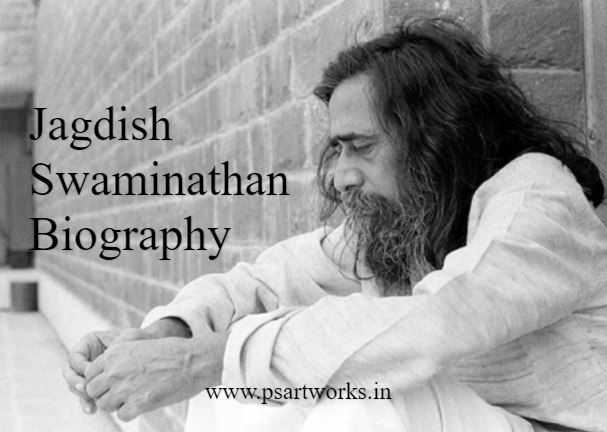 Jagdish Swaminathan in his paintings of the early 1990s seemed to continue his quest for an inner vision, which had characterized his work exhibited in 1988 and 1990.

These works were an interesting development as compared to his earlier, more carefully executed, paintings on the primordial elements, wherein the bird flying into outer space became the symbol of the self, and the transient things, symbols of timelessness.

His paintings of the later period were a combination of formal and free execution in a variety of rhythms (or perhaps lack of it) carried unconsciously.

He brought his unconscious mind to play and attempted to bring in the vital element which eludes the mathematical or methodical statement.

Swaminathan had, perhaps, gained the freedom of a child to make the Symbols into Signs of visual appeal.

Though he was fully involved, there was no emotional sensation or mood for allegories in the earlier works except for an enchanting quality.

As is obvious, neither the symbol nor the sign can be borrowed; for, they are dug out from one’s own depth of realization, of allegiance to faith.

Because, for those who created the symbols, they were soaked in meaning.

In his later paintings, however, the lines that become the abstract contours of underlying subdivided areas of the format might have been executed with comparative care to approximate the mechanical aptitude.

But the overlaid thick strokes in black applied rapidly with spatula, laying an accent on meshes of triangles, circling patterns or in serpentine movements, achieve only a sort of a casual calligraphic effect; the textural and mute harmonies of color adding to the pleasure of the eye; serving no magical purpose, but evoking a positive decorative sensation.

A variety of surface textures provide a vibrating quality and breathe their own autonomous character, drawing Swaminathan close to folk or tribal art.

Swaminathan, it seems, was attracted to the ‘elective affinities’ between the tribal and modern approach to form discovered by some of the modern masters, particularly Picasso.

Whether one can refer to Swaminathan’s work as belonging to the meditative realm or not, it surely provides a record of his gestures, sometimes slow, and sometimes fast and moody.
It is calligraphic to the extent that it is a graph of the hand directed by impulse.
Artists:
1. Leonardo Da Vinci  2. George Keyt  3. Andy Warhol