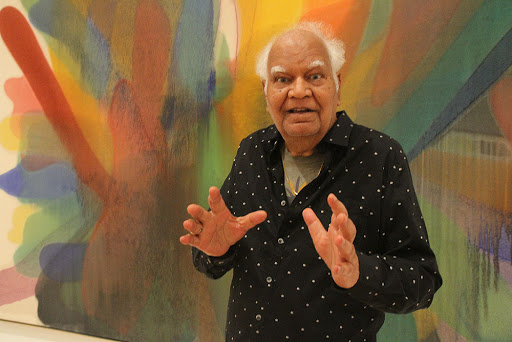 Om Prakash, in his more recent paintings entitled On Top of the Clouds, reveals a significant development in his creative approach—a swing back to a rendering of nature in a novel and innovative expression.

In fact, his work during the last four decades has undergone a remarkable series of transformations; from figurative works, portraits and landscapes initially, mostly in impressionistic or cubistic style to tantric and neo-tantric approach and lately to abstract expression.

However, he believes that knowledge of Tantra, at best, enriches the vision of the artist to see differently, totally and concretely.

Between 1967 and 1980, 0m Prakash had deviated from the visual beauty and mystery of nature towards the intricacy of the geometric form.

In the early 1980s, however, the female nude appeared in a series of paintings on Ragas, the musical modes, which recreated the bhava (expression).

It was a unique merging of a realistic motif, drenched with emotion, in a geometric environment.

Om Prakash has used his talents for the purpose of painting Ragas admirably. He has conceived the mood and the expression of different ragas in his own way and with his own feelings about them. I could see the Ragas in his paintings and therefore I think that they shall have a mass appeal.

His paintings of Mandalas (some as large as 6 feet X 6 feet), created between 1986 and 1989, send out vibrations from the artist to the spectator, multiplying in the process of their interaction.

They reveal an aesthetic richness of meaning through their complex means of subtle harmonies of colour and geometric form.

In his series of paintings, On Top of the Clouds, he has, however, broken the web of geometric formulation in favour of a more fluid approach.

To create sublime art, one must live in the abstract.

The celestial scenes, more than 30,000 feet above the sea-level, have once again drawn him to the irresistible grandeur of nature.

The apocalyptic skyscapes and the awe-inspiring sunsets which he witnessed from that altitude (from aeroplane windows) have provided him with a highly fantasised experience of the mystery and essence of nature.

Forms of fluffy clouds and serene rays of the setting the sun indeed enchant the mind. He has endeavoured to transfigure these experiences into glowing colours on his canvases.

To quote Prof Lokesh Chandra, these are ‘sparks of beauty out of the furnace of God.’

Whether it is the symmetrical perimeter and concentric division of the pictorial space or an informal and spontaneous rendering of the illusion, 0m Prakash achieves his aim with great dexterity, without losing his individuality or the integral quality of his creativity.
He participated in the vital conversation regarding the various directions of abstract art in the mid-twentieth century. He recalls an illuminating dialog with Mark Rothko:

“He looked at my paintings and said that he dug my freedom of doing what I wanted, while he was confined to work within his own formulations. He elaborated and told me that he felt like a prisoner surrounded by the high walls which were erected by himself. I said that I greatly admired him because he had found a way to express everything he wanted to, by formerly reducing his images to a rectangle – the least symbolically loaded form. I aspired then, to explore the capacities of a medium by taking it to its very extreme.”

1969 – National award for Painting of Lalit Kala Akademi, New Delhi by the Honorable President of India. Several awards in State Exhibitions including First Prizes in Annual Art Exhibitions of the A.I.F.A.C.S., New Delhi. (1966, 1967, 1969)

2003 – Delhi State Award from the chief Minister of Delhi

1961-1981 – Head, The Art Department, the School of Planning and Architecture, New Delhi