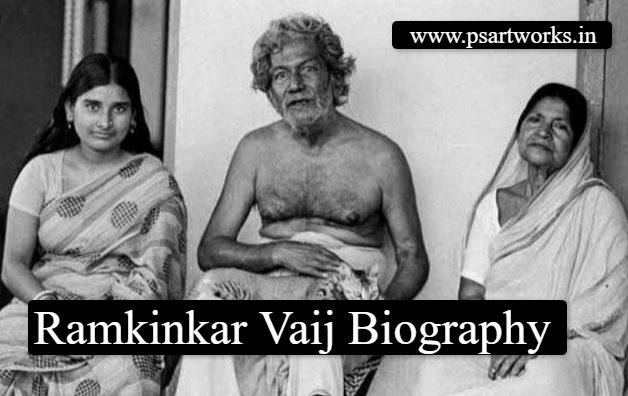 Like Binode Behari, Ramkinkar also belonged to the period of transition from traditional to modern art, creating a style of his own, rooted in his personality and environment.

As an exceptional individual, he was saturated with an intense love for life and an insatiable passion for work. By 1935, his works already showed interest in structural quality, something that is characteristic of his more mature works in the 40s and 50s, which are marked by abstract as well as surrealistic features.

And it was obviously at Shantiniketan that Ramkinkar imbibed Rabindranath Tagore’s view that tradition, though very important, should not act as a barrier between the artist and his artistic growth.

Ramkinkar’s art is characterized by tremendous energy, exuberance, and vitality, His figures and forms, whether in sculpture or in painting, are dynamic and earthy, possessing a surging movement of growth.

His sculptures have a typical ‘out of door’ quality. For, they were created on location and seem to grow out of the environmental context.

Whether in cement, plaster or stone, their forms, as it were, arise and are proliferated by their own laws, such as in his Santha/ Family. They are infused with a certain joyous and vital feeling.

Regardless of their style, whether abstract, representational or conventional, they are alive with their slow massive rhythms that respond to changing light and shadow and the forms of nature around.

His monumental oils are unconventional and highly individualistic. Ramkinkar did not imitate, forging his own path towards a desired mode of expression—abstract, cubistic, expressionistic or surrealistic.

Hence there is no stylistic affectation in his work, be it sculpture or painting. His feeling was his law.

For Ramkinkar, art was a necessity for filling up creative barrenness and poverty of imagination that surrounds our lives.

He served an inner demand that arose within himself awaiting the creative act for its fulfillment.

And he fulfilled this demand with immense creative ability till his death. He remained consistently a humanist, both in attitude and subject-matter.
Read About More Topics: