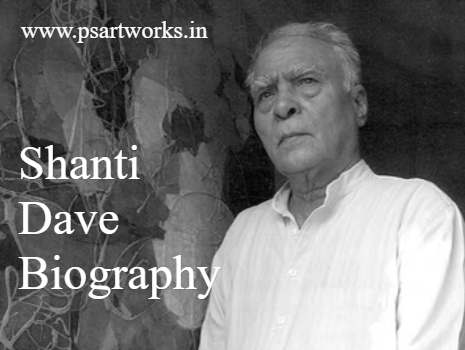 The paintings of Shanti Dave, in encaustic and oils, are a succesSive metamorphosis of colour.

He has an expression that, in fact, determines the whole evolution of his art, which may be described as ‘ abstract symbol’ or ‘ interior symbol’, divorced from any specific representation or for that matter anything ‘exterior’.

The fundamental thing that he seems to be groping towards is like the earth itself—the sum of innumerable layers of organic matter.

He uses the encaustic media, a mixture of beeswax, linseed oil, varnish and zinc oxide, to make an impasto which he lays with a spatula to formulate shapes in his paintings.

His paintings do not set out to prove or state anything.

They have nothing to do with the intellectuality of any kind. They are only a means of reviving emotions indescribable in any other way.

The directional planes, with their variety of relief textures and an aura of strange colours, seem to convey some essential message which gradually ripens on the mind of the viewer into a new fullness; a subtle musical feeling creating a meditative mood.

His highly refined shades of colours, in full harmony, appear to be melting into each other and the cosmos to a point of losing identity.

His canvases, that are wholly vibrant, consist of multicoloured and multidirectional planes assembling together to create rectilinear and curved forms that seem to be floating in a void, or one may say, immersing in a universe.

They possess a kind of dynamism, apparently without beginning or end, which permeates his work.

His decorative schemes of colour, possessing a magnificent shimmer and spreading themselves over the pictorial space create a kind of surreal colour effect or spiritual aura in ‘a form-space-light synthesis’. Shanti shows himself capable of asserting as a fine colourist.

Each of his paintings is arresting for its purely optical topography, a true feast for the eye; a fascinating inner spectacle of colour-music.

His paintings are in an intricate play of colour and texture created by imaginatively juxtaposed and meticulously executed tablet-like forms surrounded by minute semi- calligraphic and geometric motifs, in translucent colour, that act as a halo to the main form.

These are like conglomerations of form-less colours. Shanti is indeed a virtuoso as far as his technique goes.