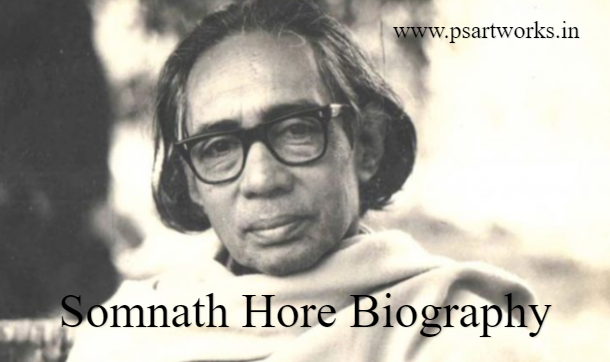 Somnath Hore, an eminent graphist, has lately chosen sculpture as a medium to express his ideas. Though Hore has moved from creating symbolic Wounds on paper to Wounds in bronze, the undercurrent of compassion for the desolate, the hungry and the downtrodden that continues to run in his sculptures is even more emphatic than his graphics.
He manipulates his media, the lost wax process of casting, to effectively depict the suffering of the toiling folk.

His essential realization of form is in the media—the sheets of wax and rods and their twists, cracks, and burns that precede their casting in bronze.

The bold pattern of bosses and recessions and the rhythm of broken surfaces achieve a subtle sparkle and variety through soft metallic reflection and patina.

New rhythm and combination of forms applied to an intense human expression seem to occupy him most.

The quality of his work, from a sculptural point of view, is revealed from the way he has touched and handled the media.

He articulates it with passion and understanding and notes the relationship between full and empty, the round and angular, raised and recessed, and form and hollow spaces or negative volumes.
Hore seems to make conscious use of concave to replace saliencies. He exploits the hollow of negative portions, seen in certain light as raised or positive, creating a realization of unique expression; the concaves, drawing one’s attention inwards to convey the inner feelings of the subject, may this be a human or animal form.

Hore is as modern in approach to his sculpture as he had been in his graphics, forging a contemporary aesthetic language.

He creates a mysterious dualism of art, forms, and content, to create a powerful expression. He alternates his motifs between man and animal in the familiar tragic strain, such as in his Mother and Child and Hunted.
His bronzes, which are ‘sculpture transparentes’ or openwork sculptures, create a haunting effect to touch the conscience of the viewer.