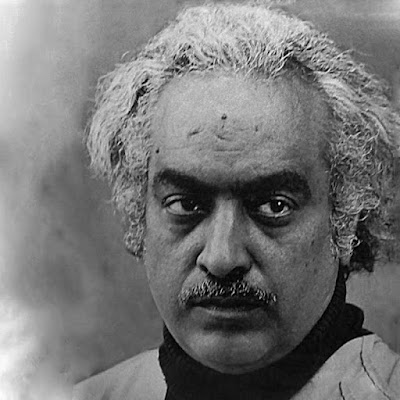 The aesthetic experience in India has traditionally been defined as a specific role and function.

It was not merely artistic skills that played a role in defining this experience; more important was the profound connection with the inward powers of the artist’s creativity that gave internal strength to the aesthetic consciousness of the artist.

The art of G.R. Santosh is in the spirit of this indigenous attitude and explores the spiritual basis of man’s Being. 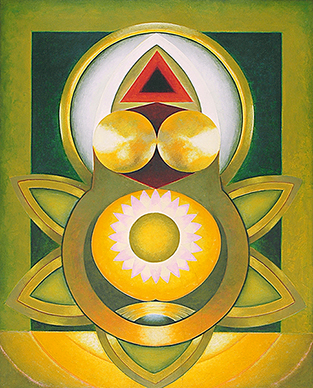 His artistic activity and spiritual exploration coalesce in accordance with the Indian tradition, wherein spiritual bliss is synonymous with aesthetic bliss, both being attained through absorption and contemplation.

Although the geometrical configurations in his paintings are closely linked with the tantric traditions, they do not serve any specific magical functions that were normally assigned to yantras in the Tantrik systems.

The forms of his art are the forms of his consciousness and aspirations. He presents a coherent world in the vital images of his heightened awareness. 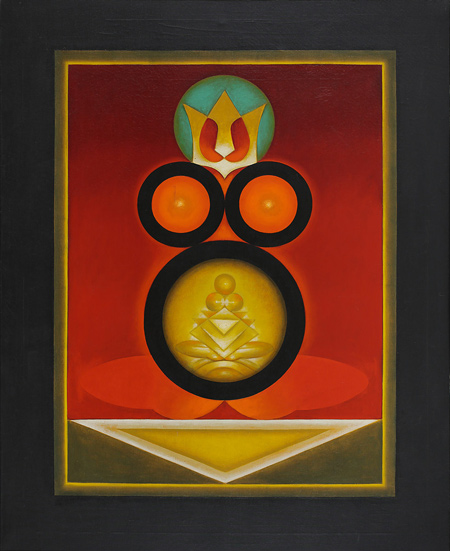 The geometrical forms are like graphs of laws and energies that are on both the sensible and super-sensible levels.

There is a link between the mathematical and geometrical in his concept of metaphysical reality.


Behold ,And Then You May Well Believe,The Only To Trust Is The One You Hear…..G.R. Santosh

His perception of geometry and free extensions of its forms, for a transformative effect on the human mind, is closely related to the concepts of numbers and significant syllables or letters.

Like a yantra and mantra, the concentrated symbolic form of his images becomes a means of experiencing the cosmic forces of nature.

His concept evolves from the number ‘1’, generating the point, ‘2’ the line and ‘3’ the triangle which is the first form to enclose space.

He elaborates on the concept of the triangle into a hexagon and its intricate expansions.

He interweaves the triangles and develops the scheme by means of symmetry and balance in a highly imaginative manner to create an innumerable variety of formal configurations.

He develops vertical, horizontal, oblique and circular movements for creating a network of lines and forms that determine all the static and kinetic sequences in the geometric configurations and designate them a formative quality of a unified organic whole in a variety of colour schemes—a significant creation of his inward eye, In his most recent works, however, unlike his earlier paintings which represented the undifferentiated ‘divine’ in a juxtaposition of symbolic geometrical configurations, there is an aesthetic tribute to the manifest forms of the elements (earth, water, fire, air and the self) in a highly decorative idiom.

The paintings are conceived as asymmetrical image wherein he portrays his own self as a central motif.

The later paintings, though more fluid than his earlier works are meticulously executed in the manner which has been the hallmark of Santosh’s so-called ‘Tantrik’ themes.
Artists:
1. Leonardo Da Vinci  2. George Keyt  3. Andy Warhol