“Painting is poetry that is seen rather than felt, and poetry is a painting that is felt rather than seen.”― Leonardo da Vinci

“You should look at certain walls stained with damp, or at stones of uneven colour. If you have to invent some backgrounds you will be able to see in these the likeness of divine landscapes, adorned with mountains, ruins, rocks, woods, great plains, hills, and valleys in great variety; and then again you will see their battles and strange figures in violent action, expressions of faces and clothes and an infinity of things which you will be able to reduce to their complete and proper forms. In such walls, the same thing happens as in the sound of bells, in whose stroke you may find every named word which you can imagine.”― Leonardo da Vinci, 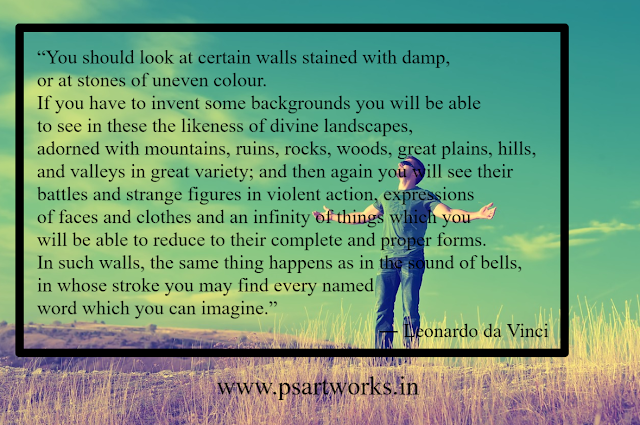 “Once you have tasted flight, you will forever walk the earth with your eyes turned skyward, for there you have been, and there you will always long to return.”― Leonardo da Vinci

“It had long since come to my attention that people of accomplishment rarely sat back and let things happen to them. They went out and happened to things.”― Leonardo da Vinci

“Nothing strengthens authority so much as silence.”― Leonardo da Vinci

“I love those who can smile in trouble…”― Leonardo da Vinci 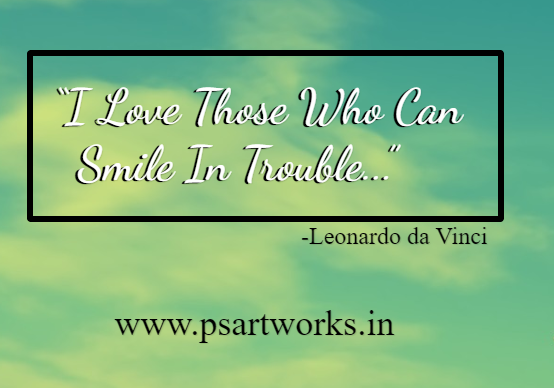 “I expose to men the origin of their first, and perhaps second, the reason for existing”― Leonardo da Vinci

“Those who accomplish don’t sit around, hoping things will happento them”…”― Leonardo Di Vinci

“Principles for the Development of a Complete Mind: Study the science of art. Study the art of science. Develop your senses- especially learn how to see. Realize that everything connects to everything else.”― Leonardo da Vinci

“I am fully conscious that, not being a literary man, certain presumptuous persons will think that they may reasonably blame me; alleging that I am not a man of letters. Foolish folks! do they not know that I might retort as Marius did to the Roman Patricians by saying: That they, who deck themselves out in the labours of others will not allow me my own. They will say that I, having no literary skill, cannot properly express that which I desire to treat, but they do not know that my subjects are to be dealt with by experience rather than by words; and experience has been the mistress of those who wrote well. And so, as a mistress, I will cite her in all cases.”― Leonardo da Vinci, Leonardo’s Notebooks

“to Nature, since it is only by chance that they wear the human”― Leonardo da Vinci,

“No counsel is more trustworthy than that which is given upon ships that are in peril.”― Leonardo da Vinci, Leonardo’s Notebooks

“That which can be lost cannot be deemed riches. Virtue is our true wealth and the true reward of its possessor; it cannot be lost, it never deserts us until life leaves us. Hold property and external riches with fear; they often leave their possessor scorned and mocked at for having lost them.”― Leonardo da Vinci

“I believe man will fly and I base this assumption on the fact that God has blessed us with minds that are capable of imagining it. Anything that can be dreamt of will eventually be built. Anyone who says otherwise is a fool.”― Leonardo da Vinci

“One cannot possess a greater or smaller capacity than self-mastery.”– Leonardo da Vinci