Skip to content
Intentions and transparency in pictures and photographs 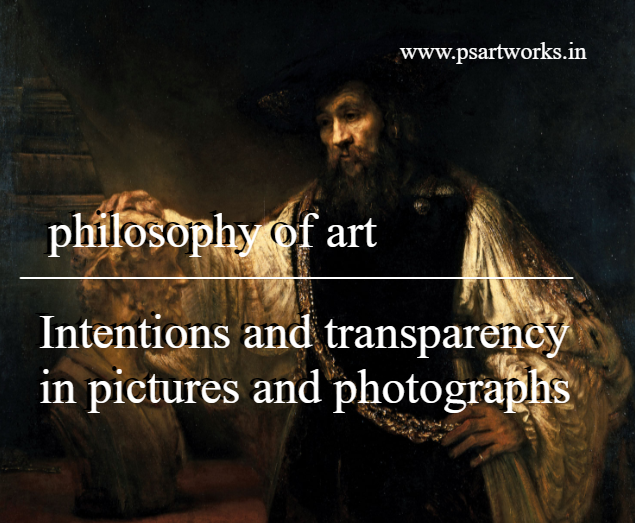 Let us examine how photography complicates the analysis. You have no doubt heard someone say, about a photograph, “Look at this picture I took.” In contrast, no one talks that way about drawing.

You “make” a drawing, rather than “take” one. This linguistic distinction suggests awareness Of a difference in the way that drawings and photographs relating to both their creators and their denoted subjects.

At the same time, it is quite natural to think of photographs as a species of picturing. Therefore reflection on photographs may enrich our thinking about pictorial representation.

Photos may invite us to reconsider how pictures denote, and what it means for a picture to represent a state of affairs.

Dominic Lopes maintains that photographs reveal the key to understanding all picturing (Lopes 1996: 179).

To make sense of Lopes’ claim, however, it is necessary to understand how it contrasts with the position held by Kendall Walton (1984).

The expression or application of human creative skill and imagination, typically in a visual form such as painting or sculpture, producing works to be appreciated primarily for their beauty or emotional power.

Creative activity resulting in the production of paintings, drawings, or sculptures.

The various branches of creative activity, such as painting, music, literature, and dance.

Subjects of study primarily concerned with human creativity and social life, such as languages, literature, and history (as contrasted with scientific or technical subjects).

A skill at doing a specified thing, typically one acquired through practice.

Walton is the best-known advocate of the transparency thesis, the position that photographs are unique among pictures in being transparent to their subjects.

Against Lopes, Walton thinks that photographs are fundamentally different from non- photographic pictures.

Think of the difference between an opaque brick wall and a transparent glass window. You can see through the window to objects on the other side.

The process of seeing an object involves interaction with light reflected from it, and the light that passes through a window is coming from the object on the other side of the glass.

The window might distort whatever you see through it, as when the glass is of uneven thickness, but the distorted object that you see is the same one you’d see if the glass was not there.

Consider, then, why you see what you see when you look at a photographic print, such as your driver’s license or identification card photo.

The print is a visual object because it absorbs and reflects light, and this pattern of reflection is determined by the pattern of light that reached the camera lens, which is light reflecting off whatever is in front of the camera. (Notice, furthermore, that the camera can be eliminated.

Some photographers, such as Man Ray, make photographs using photographic negatives but no camera.) Next, consider a mirror. When you look at your face in a mirror, you see yourself and not a representation of you. Why? Because you see the pattern of light that reflects off your face, reflected back to you.

A photographic print likewise reflects the pattern of light that reached the camera lens, and so to look at a photograph is to look through the piece of paper or screen to whatever was photographed.

Looking at a photograph of your own face is no different from looking at yourself in a mirror. You literally see yourself. Like the mirror, the photo is a device for seeing what cannot be seen directly. Like a window or mirror, a photograph is transparent to its subject.

Walton’s transparency thesis has the important implication that it makes photographs — and films, which involve a series of photographs — essentially different from drawings, paintings, and all other non-photographic picturing.

Photographs provide “visual experiences which do not depend on the picture maker’s beliefs in the way that paintings do” (Walton 1984: 264). In contrast, you do not literally see Willem van Ruytenburch by looking at Rembrandt’s Night Watch.

You see a representation of him, and that representation inevitably presents Rembrandt’s decision about what he wants to show. Therefore a non- photographic picture is always opaque with respect to its subject.

It does not allow the viewer to see the thing it denotes. In contrast, photographs show whatever was there.

What looks like a photo of a unicorn is probably a photograph of a horse with prosthetic make-up.

An advertising photo of a bowl of cereal is probably a photograph of the cereal in white glue, not milk. So although photographs constitute evidence in a way that drawings and paintings do not, they have their limitations as evidence.

Nonetheless, photographs furnish a natural realism in seeing that cannot be derived from other modes of picturing.
Against Walton, Lopes (1996) contends that transparency is not the essential difference between photographs and other pictures.

Every picture is transparent to its subject, Lopes argues that no picture denotes its subject visually unless its visual appearance depends on how the subject really looks: “All pictures if they are information-transmitting devices, are causally linked to their sources” (Lopes 1996: 163).

For example, Night Watch cannot contain a portrait Of Willem van Ruytenburch if van Ruytenburch was beardless, II years old, and 4 feet tall in 1642, its year of execution.

The mustachioed man with the spear is pictured as much older and taller than that, Similarly, a mere blotch or squiggly scribble is not a picture of any person, for it does not contain visual information facilitating visual recognition.

It can represent something beyond itself, in the same way, that mere dots on a map represent towns, but nothing pictures what it represents unless the causal mechanism of seeing guides the selection of marks that subsequently guide viewers to the visual recognition.

Lopes’ final step is to argue against Walton’s claim that paintings are special because their patterns always depend on the picture maker’s beliefs about the subject.

A “competent draughtsman” might render the visual aspects of something without forming beliefs about the nature of the object being drawn, and yet the result will be recognizable to those who can recognize the object (Lopes 1996: 186; a case study is provided by Sacks 1998: Ch. 24).

Visual transparency is an essential feature of all picturing, not just photography.

The debate over transparency raises an important question about the role of intentions in picture-making.

A child’s scribble can represent the family’s dog in the same way that a line on a map represents a highway, by the mere intention to have it stand for that thing.

However, neither the scribble nor the dot is a picture of what it denotes. So the intention is insufficient for picturing.

Now suppose that it is true that picturing is independent of a picture maker’s beliefs (as Walton claims of photographs and Lopes claims about all pictures).

One implication is that Hopkins and Wollheim is wrong to claim that a visual design becomes a picture by the presence of a human intention to provide a design that is to be interpreted in a particular way.

Another implication is that a mechanical copy of a picture will denote whatever the original picture denoted. Because this implication falls foul of the lesson of indiscernible counterparts.
Read About More Topics: