ASOKA, AND THE BEGINNINGS OF THE BUDDHIST SCHOOL (cir. B.C. 250) 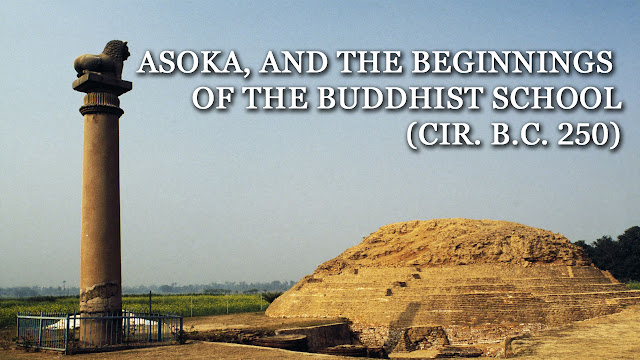 Up to the middle of the third century B.C. the course pursued by the building art in India has been only indistinctly visible, as it is obscured by the mists of time.


So far, therefore, any account of its progress has been based very largely on evidences of a miscellaneous order such as certain structural remains and various investigations from which the foregoing conjectural impressions have been compiled.

Now, however, supposition hardens into fact and the picture hitherto undefined comes with an almost dramatic suddenness sharply into focus.


This effect was brought about by the policy of the third Mauryan ruler of Magadha, the emperor Asoka who ascended the throne in B.C. 274.


An early decisive step taken by this monarch was his acceptance of the teachings of the Buddha.

Soon it became apparent to him that the religious beliefs of his subjects were inclined to be indeterminate, and that a radical change in their spiritual outlook was desirable.


That the country was ripe for some form of conversion was also obvious.


The existing cults consisting mainly of visionary speculations and intangible abstractions were proving unsatisfying, and men’s minds were in a receptive mood fully prepared for a doctrine founded on a more substantial basis.


In other words, there was at this period what may be described as a religious vacuum. And Buddhism redressed this void.

Included in its precepts was a material object of veneration, such as the worship of sacred relics, which made a direct appeal to a people perplexed and disillusioned by unconvincing observances.


Accordingly, in B.C. 255 Asoka inaugurated Buddhism as the state religion of the country.


The correctness of the royal reformers’ precognition is proved by the whole-hearted manner in which the Buddhist faith was assimilated by his own people and furthermore by the astonishing rapidity with which its tenets were conveyed to and its ritual observed in most of the countries of Asia.

With this change in the religious system of India also came a marked advance in the arts.


Buddhism essentially a graphic creed, art became its handmaid, so that wherever it penetrated it was accompanied by forms and symbols expressive of its teaching.


In India, this early Buddhist art was of a special kind as it was the result of the Mauryan emperor’s own personal predilections and its productions have been referred to as those of the Asokan School.


Its elements were due to the ruler’s initiative, they were practiced only during his reign, and they ceased when it ended.


It was therefore essentially autocratic in its character. But although this first manifestation of Buddhist art was confined within such seemingly narrow limits, and its actual productions were relatively few in number, they were of such exceptional power that they influenced to a notable degree much of the art that followed.

The significance of this school lies in the fact that it marks the beginning of an era when India through Buddhist thought was in a position to dictate to the rest of Asia its religion, its symbolism, and its art.
The principal contributions made by this school to the art and architecture of the time were some six in number, consisting of the following:


(1) a series of edicts inscribed on the rocks,
(2) a number of tumuli or stupas,
(3) certain monolithic pillars,
(4) several monolithic accessories to shrines,
(5) the remains of a vast palace, and
(6) a group of rock-cut chambers.


Among these productions that more directly affected the course of the art of building were the stupas on account of their structural significance, the monolithic pillars in view of their artistic qualities, the rock-cut chambers because of their technique, and the palace for its architectural associations.

The order in which these manifestations took form, and the manner of their execution maybe explained.


Possessed of great ideals, as Asoka’s policy throughout plainly indicates, one of this ruler’s most earnest desires appears to have been to institute a permanent record of the establishment of the Buddhist faith within his now widely-spread dominions.


A craving for a symbol of stability occurs in the early evolution of most nations, a need for some “substantial link which holds them to the soil” and is a stage in the development of racial self-consciousness.

As a case in point the Pharaohs realized this when in their inscriptions, they boasted of having erected “everlasting stone monuments”, in honor of the gods.

Some such reflection no doubt inspired the Emperor Asoka when as a beginning he carved his famous edicts on the living rocks, proclaiming as they do, in plain terms that his efforts should result in the “long endurance of the Good Law”.


These inscriptions, although many have survived, were not, however, sufficiently striking to suit his purpose: what was evidently in his progressive mind was the creation of a memorial of such a permanent nature that it would outlast time itself.


With this in view, he caused to be raised in many parts of his empire circular tumuli of brick, sacred mounds commemorative of the Buddha.


These “stupas”, as they have been called, from the Prakrit word thupa,were not unknown in India before this date, but their shape, like that of the pyramid, implies durability.

As the stupa from the nature of its structure was subject to disintegration owing to the effects of the climate, it became necessary for the Mauryan Emperor to seek for some more lasting method of achieving his purpose.


Aware no doubt that other nations were using stone, he began therefore to “think in stone”, and in the course of time an impressive monument symbolizing the creed was devised in the form of a pillar, a lofty free-standing monolithic column, erected on a site specially selected on account of its sacred associations.


A number of these Asokan pillars were distributed over a wide area and a few bear ordinances inscribed in a manner similar to the edicts on the surfaces of the rocks.


The effect of such columns, some of them as much as fifty feet in height, each carrying above its capital a magnificent Buddhist emblem, on the minds of a people hitherto living in a somewhat restricted wooden building tradition was no doubt very great.


But these remarkable monuments were by no means, the only sculptured stone objects wrought in this manner.

With them were other monolithic productions, such as railings, stupa finials in the form of umbrellas, lion thrones, colossal figures, and the pillars of an immense hypostyle hall in the royal palace at Pataliputra, all of which show that the stonework of the Asokan school was of a highly diversified order.


Added to these objects of a mobile character was another and more static development of the stone cutter’s art in the form of a group of sanctuaries excavated in the rocks of the Barabar hills near Gaya in Bihar, obviously the work of the same skilled hands.


But, whatever form it took one unique quality marks all the stone production of the Asokan period, one technical characteristic which is never omitted so that even a small fragment may be immediately identified, is the high lustrous polish resembling a fine enamel with which the surfaces, even of the rock-cut chambers were invariably treated.

Finding expression from wood in another and more lasting material such as dressed-stone is a decisive step in the cultural evolution of a person.


But the manner in which this step was taken under Asoka’s direction, and the results it produced are both of more than ordinary significance.


Appearing as these sculptured forms do fully matured, at a time when Indian art was still in its infancy, and without any previous preparation, is a phenomenon that needs some explanation.


The stones themselves provide the answer. The unerring precision with which they were worked and chiseled show that those who quarried and carved them were no novices at their craft, as would have been Indian artificers, but had generations of experience behind them.


The shapes and decorative forms employed are few of them indigenous, but on the other hand, are obviously derived from the art repertory of another and more advanced people.


Such exotic forms are not difficult to identify as some of them are clearly of Greek, others of Persian, and a few perhaps of Egyptian extraction.


This development of the art of working in stone, therefore, which Ashoka introduced into the country represents an Indian offshoot of that forceful Graeco-Persian culture which flourished with such vigor in Western Asia some centuries before the Christian era.

At this juncture a brief reference to the source of the culture from which Asoka drew his inspiration seems indicated.


From c. 500 B.C. and the ensuing 170 years the pulse of Asiatic culture throbbed in what was then the fertile land of Persia, and as a result, there developed in the capital cities of that great empire, the nearest to India, a classical art school composed of Pharoic-Hellenic-Iranian elements of a distinctly virile character, This school was probably partially dispersed by Alexander’s conquest of Persia together with the downfall of the Achaemenid dynasty in 330 B.C., but the unsettled period which then ensued was rapidly followed by the extension of the Macedonian empire in the east by means of Greek colonies, such as that of Bactria, which brought the full force of Hellenism to the very borders of Mauryan India, What actually happened to the exponents of the original Achaemenid school under such conditions can only be a matter of conjecture, but that they and their successors continued to flourish under the intelligent patronage of the Asiatic Greeks, producing works with still more marked Hellenistic features cannot be doubted.

It was at this stage of the movement that the Indian emperor Asoka conceived the project of erecting his stable and symbolic monuments to the Buddhist faith, and instinctively turned to the descendants of the workmen who had already shown such proficiency in their construction of the stately palaces of the Persian kings.
To attain his object the Mauryan monarch adopted the common practice of royal art patrons, and brought into his service a group of experienced foreign artists of a sufficiently adaptable nature to put into effect his progressive ideas.
Historical instances of such a procedure are numerous, but some of those which account for the particular character of the Achaemenid art of Eastern Persia and in the course of time of that of the Asokan school, have a direct bearing on the style which afterward appeared in Buddhist India.

For instance, in the production of their magnificent palaces at Persepolis and Susa, the Persian kings made use of talent drawn from the leading art schools of the then known world.

Even without the recorded statement of Diodorus that Egyptian artists worked on these buildings.
Such attributions as the winged globe and the cavetto cornice are proof of their employment in this enterprise.

Side by side with the skilled craftsman from the Nile were stone carvers from lonia noted for the fineness of their workmanship and minuteness of detail, evidence of which may be recognized in the high quality of the reliefs on the palace walls.


Masons’ marks from the Greek alphabet on the Hall of a Thousand Columns which forms such an important part of the Persian palace indicate that artificers from Hellas took their share in the construction, while in the realm of the fine arts there is the testimony of Pliny that the Greek sculptor Telephanes of Phocaca was attached to the courts of both Darius and Xerxes.

CONTINUE READING: ASOKA, AND THE BEGINNINGS OF THE BUDDHIST SCHOOL -2
Read About More Topics: