Skip to content
ASOKA, AND THE BEGINNINGS OF THE BUDDHIST SCHOOL (cir. B.C. 250) 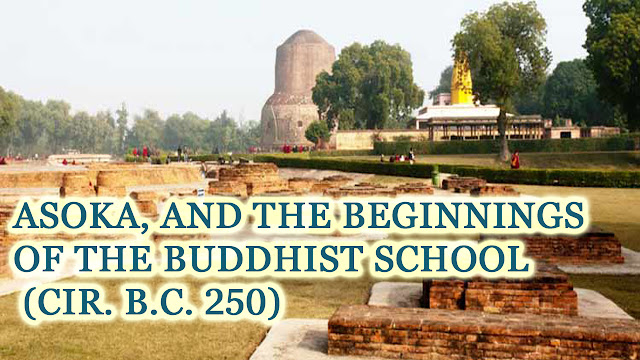 In these circumstances it is not difficult to account for the form and character that the giant pillar and the other lithic productions of the Asokan period assumed.
From the columned halls reared under the orders of the Achaemenid kings, from their sculptured reliefs and their inscriptions on the rocks as at Behistun,the Indian monarch obtained some of his inspiration, and from the ranks of those who produced them he secured the skilled artificers to aid him in his projects.
In short, it may be presumed with some degree of certainty that, attracted by the emperor’s assured patronage, there was eventually gathered in a quarry workshop near Chunar in Bihar a small group of imported workmen trained in the Graeco-Persian traditions and engaged to collaborate with a number of selected Indian craftsmen to fashion these the first dressed stone objects to be produced on Indian soil.
Of the achievements of this composite school established by Asoka, the free-standing pillars are unquestionably the most notable.
Originally there appear to have been about thirty of these monoliths, of which the remains of some ten are in existence. Two of them. with lion capitals, are still standing in situ, and in fairly good condition, one at Kolhua (Bakhra) and the other at Laurya Nandangarh. both in the Champaran district of Bihar.
Of the remainder, those of which the capitals have survived are now preserved in the Indian Museum. In selecting an appropriate standpoint for the pillars, several appear to have been erected on sites sanctified by the Buddha, while others marked the course of a Pilgrim’s Way to the holy places.
The line of pillars in the Champaran and Muzaffarpur districts—at Rampurva, Laurya Araraj, Laurya Nandangarh, and Kolhua were evidently placed at intervals along the ancient royal route from Pataliputra to the sacred land of Buddhism on the borders of Nepal.

It is possible that the one at Sanchi belonged to a series which lay on a more western line of approach.
In no instance do the pillars appear merely as isolated monuments, as in the vicinity of each of them are the remains of stupas and other buildings showing that they formed part of the structural accompaniments of an extensive Buddhist settlement.
Each pillar consisted of a plain unornamented shaft, circular in section, from thirty to forty feet in height, and arising straight out of the ground without any suggestion of a base, tapering like the trunk of a tall palm tree.
At the top of this shaft which is two feet in diameter is a campaniform capital its abacus acting as a support for a large sculptured Buddhist symbol, the whole combination attaining a height of nearly fifty feet.
Apart from their Buddhistic significance the Asokan pillars are expressive of a very ancient and widespread belief, and were in the first instance inspired by man worshipping among the groves and great trees of the forest.

A suggestion of this tree worship may be seen on the bas-reliefs of the Barhut railing (eir, 150 B.C.) where tall palm trees reminiscent of pillars are conventionally placed at the sides of some of the scenes, while about the same date are the devotional columns with palm leaf capitals at Videsa (Besnagar).
With the reverence for trees came a veneration for huge stones and boulders, the sacred and mystical character given them being but a prelude to shaping them into upright forms.
The aesthetic properties of the pillars are concentrated in the design and execution of the capitals and superstructure.
These portions of the monuments which together average seven feet in height are in one piece of stone, while the shaft of the column consists of another separate piece, the two being joined by a copper bolt accurately fitted into the tenons made for it without the use of cement.
The bolt in one of the Rampurva pillars has been preserved, and is a barrel-shaped piece of metal over two feet in length, showing that those who employed this copper dowel  were quite aware of the destructive action of iron and other metals in such circumstances, The capitals themselves, which are some three feet in diameter, are campaniform in shape consisting of a series of fluted petals elongated and which, falling together, take the form of a bell.
In most instances the capitals are cut to one specified pattern, the exception being that at Nandangarh, which appears slightly stunted in its proportions, while the abacus and other features arc somewhat different, so that it is possible this particular example was an early and experimental effort.

There may be some symbolic connexon between the campaniform capital and the bell (ghanta), as this in a conventional form, was used early in India decoration, and it also figures prominently in the temple ritual.
But the boldly marked fluting the section of which is unmistakable, has an undoubted foreign origin, exactly similar fluting being not uncommon on Persian and Greek pillars, as may be seen on the bases of those at the palace of Artaxerxes II (B.C. 404-358) at Susa, and on the capitals of the Ionic temples of Apollo at Naukratis and Diana at Ephesus, both of which were built about 560 B.C.
Above the Asokan capital is a circular abacus having its broad edge carved with ornamental borders of a special character.
On some of these are repetitions of Buddhist emblems, as for example the goose (hamsa), but on others, as in the case of the bull capital at Rampurva, there are such well-known conventional motifs as the honeysuckle and palmette, the bead and fillet, and the cable molding. each one of direct Hellenic extraction.
These motifs may not be in exact accordance with the most approved classical models, but any deviation from the original pattern is no doubt due to their long journey from the Aegean starting point.
It is however in the massive Buddhist composition poised above the abacus that the greatest imagination has been shown, and symbolism utilized to its utmost extent. Most of the superstructures consist of figures of animals, each of which has a mythological meaning.
Together they symbolize the four quarters of the universe, the elephant being the guardian of the cast, the horse of the south, the bull, as at Rampurva,of the west, and the lion, as in the Nandangarh example, of the north.
All four animals are carved in relief on the abacus at Sarnath, by far the finest of the entire group, evidently signifying that, although this pillar was primarily associated with the north by its position and the conventional group of lions above, it was also intended to commemorate by the addition of the great wheel which these beasts support, the proclamation of the Good Law of the Church of the Four Quarters), Such were the Buddhist interpretations, but not a little of this animal symbolism was drawn, in the first instance, from Vedic sources.
The Rig-Veda gives the place of honor among all wild beasts to the lion, which roamed the jungles of India until comparatively recent times, while a swift or galloping horse represented the sun, and the bull Dyausor Indra the sky-god, all of which are illustrated on the abacus of the Sarnathcapital.
From this and other evidence, it is clear that much of the primitive Buddhist symbolism as expressed in its art was a continuation of the Vedic mythology.
As works of art the Asokan pillars hold a high place. They are boldly designed, finely proportioned, and well-balanced conceptions. fulfilling admirably the purpose for which they were intended.
This purpose was solely monumental, as they are free-standing pillars, not part of an architectural composition, an object which has been kept in view throughout. The animals, which are the main features in the scheme, are noble conventional representations, spirited yet dignified, ideal examples of their kind.
Few works of this nature could be more arresting than the broad sculptural treatment of the bull on the column from Rampurva, a superb creation, simply and truthfully rendered.
Even this excellent specimen, however, has its equal in the group of four addorsed lions surmounting the Sarnath capital, who unfortunately lose some of their effect by being deprived of the massive wheel of metal they were meant to support, that “Wheel of Order” which the Rig Veda tells us “rolls around the Heavens”: but the pose of their limbs and the tense muscular anatomy are the work of an accomplished hand.
These lions are manifestly a Hellenic attribution, their masks (originally provided with metal eyes) and flowing manes recalling the lion-headed spouts on Greek and also Roman buildings.
For the quality of the workmanship in their production there can be nothing but praise, the bold contours of the figures in the round, the subtle modeling of the relief, and the unerring confidence of the chiseling being remarkable.
In sharing the credit for these masterpieces, it is felt that the symbolism and imagination, their spiritual message so to speak, was supplied by the Indian mind while most of the technical skill, together with certain decorative elements, were the work of the imported craftsmen.
But the brilliant polish which gives such a finality to the work was the result of Indian thought and labor, as there is evidence of an indigenous aptitude in this aspect of the stone-cutters’ art, As a proof. few objects could be more delicately wrought or highly polished than the crystal reliquary? From the Piprahwa stupa, which has been assigned to this epoch, and was the handiwork of a pasana-kottaka or hereditary stone-cutter.
The lustrous finish of the crystal was obtained by the laborious application of an agate burnisher, and somewhat the same process was adopted in the pillars and other sandstone objects.
In completing their handiwork with this glazed effect the Asokan artificers were following the procedure of all early stone-workers, as the aim for instance of the 12th dynasty Egyptian masons was a “glassy surface,” while the ideal stonework of the Greeks is described in the Homeric poems as “polished-shining-glistening”.

It is doubtful, however, whether the creations of any of these great building nations could compare in this particular respect with the brilliant enamel-like finish obtained by the Mauryan craftsmen.
So striking is its appearance that in the fifth century it excited the admiration of that observant Chinese pilgrim Fa-Hien, accustomed as he must have been to the famous polished lapidary of his own countrymen, for he writes that it was “shining bright as glass”.
And even in spite of over two thousand years of the most destructive climatic conditions these monuments retain much of their highly glazed surface at the present day.
CONTINUE READING: ASOKA, AND THE BEGINNINGS OF THE BUDDHIST SCHOOL -3