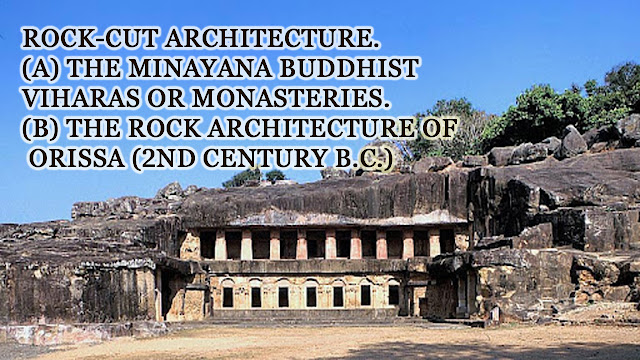 The architectural treatment of the Rani Gumpha is characteristic of the Orissanstyle of rock-architecture as a whole, and provides the key to the entire movement.


In the design of the pillars supporting the verandahs and the pilasters of the mural arcading two traditions are represented.

No one saves us but ourselves. No one can and no one may. We ourselves must walk the path.Three things cannot be long hidden: the sun, the moon, and the truth.


The former on the one hand is shown by their simple bracket capitals that they are of indigenous origin derived from a wooden prototype; on the other hand, the pilasters on the walls with their capitals formed of addorsed animals are debased descendants of the Persepolitan order, still identifiable although rough and coarse in their technique.


Yet in spite of the appearance of this classical motif, there is much in the decorative nature of the arches to connect it with the early structural art of the country.


It is fairly clear that this ornamental arcading was suggested by the wooden barge-boards at the gable-end of the ordinary house adapted and repeated so as to become mere embellishment.


It is possible to see by the manner in which each member of the arcading fulfills its purpose, the arch “riding” firmly on the pilaster capital, the “railing” string-course fitting securely into the expanded “springer”, with the central positions of this rail-molding supported on corbels, all of which are reminiscences of a structural experience of no common order.


Of the plastic decoration of a less conventional nature on the Rani Gumpha, there are certain floral forms boldly modelled and singularly Gothic in their execution, but the chief interest centers in the figure scenes, the frieze already referred to being full of spirit and dramatic power.

There are also single figures of life-size proportions sculptured in prominent positions, some of them armed with spears acting as guardians or doorkeepers.

Of striking appearance are two burly individuals mounted on ponderous animals, the one seated on a bull being strangely Assyrian in its modelling and conception as a whole.

Within the cells of this gumphathere are the remains of a system of water-supply, apparently conveyed from a rock- cut cistern above, and distributed by means of channels throughout the entire composition, but whether for ablutions or connected with the ritual is not clear.


Other monasteries on this site, treated in much the same manner as the preceding, but simpler in their formation, are the Ganesha Gumpha, the ManchapuriGumpha, and the Ananta Gumpha.


The Ganesha, or Elephant cave, is probably one of the earliest examples and displays several interesting features.


It is excavated in a ledge, or terrace, of rock, the exterior consisting of a columned verandah, some thirty feet wide and six feet in depth, and approached by steps flanked with figures of elephants.


This scheme of sculptured animal guardians to the entrance to a rock-cut hall appears here for the first time, but it was afterwards developed with considerable effect in the Brahmanical temples excavated much later at Ellora and Elephanta, with the elephants, however, replaced by lions.


The pillars forming the facade of the Ganesh Gumpha were originally five in number, and are of a type frequently found in this group, the shafts being, in section, square above and below, but octagonal in the centre, with a figure bracket at the top to support the overhanging cornice or eave.

At each end of the facade is projected a pilaster in antis, not however repeating the conventional design of the pillars, but boldly carved in the shape of a figure—a doorkeeper, or dwarpala, armed with a huge spear, and above him, forming the capital to the pilaster is a kneeling humped bull.


Executed a little later, the Manchapuri Gumpha or “House of Earth”, and the Ananta Gumpha, the latter being on the southern, or Khandragirihill, are composed of elements and motifs, not unlike those in the Ganesh Gumphajust described, and which are common to the group as a whole.


These sculptured forms, especially when used in the bracket capitals, as for instance the figures astride hippogryphs, have a very ancient appearance, and seem to have emerged from an early phase of art and building construction, of which all other records have disappeared.


As already remarked a similar motif was revived several centuries later in the rock-architecture of Badami, but it is so rare and distinctive as to suggest a lost tradition of some importance.


The productions at Khandragiri are coarsely rendered, and not of a high standard of design or workmanship.


Moreover, they seem to have been an end in themselves, as except in the few details referred to, they led to no further development, their forms died early in the Christian era leaving no heritage.


On the other hand, this Orissan rock architecture has every appearance of being a final copy, or the last stage, of a cultural movement which at one time had no little significance, a method of expression strictly regional, but of a profound and moving character.

What is left merely represents it in its decay.

At the ancient city of Junagadh, capital of this State in Rathiawar, the existence of a considerable group of “caves” indicates that here at one time was settled a thriving religious community manifestly Buddhist and Jain.


One of the Ashokan inscriptions on a rock at Girnar a mile east of the city is proof of the antiquity of this settlement and also of its Buddhistic origin.


The remains of cells suggest that here was at one time a monastery for the accommodation of a large fraternity, while some of the more elaborate excavations, particularly those in the Uparkot, or citadel, by their design seem to signify some special form of custom or ritual.

These halls, apparently for communal purposes, are in two stories connected by a winding staircase, with a lower story having broad recesses all round its walls surmounted by a typical frieze of Buddhist chaitya arches.


The upper chamber, to which is attached a small refectory, also contains a tank and is surrounded by a corridor.


But the most striking feature of this compartment are the six columns supporting the roof, which, on account of their rich carving, from base to capital, stand out both in their design and technique as the production of one or more experienced craftsmen.


No other workmanship quite of this character is known in these parts, and it seems as if here, early in the Christian era probably about 300 A.D., a small group of rock-carvers of exceptional ability flourished for a time and then to have disappeared.

Three things cannot be long hidden: the sun, the moon, and the truth.

The mind is everything. What you think you become.

You only lose what you cling to.

Do not dwell in the past, do not dream of the future, concentrate the mind on the present moment.

Peace comes from within. Do not seek it without.

All that we are is the result of what we have thought.