Skip to content
BUILDING DURING THE RULE OF THE EARLY MAURYAN DYNASTY (ce. 400 B.C.)
WOODEN ORIGINS 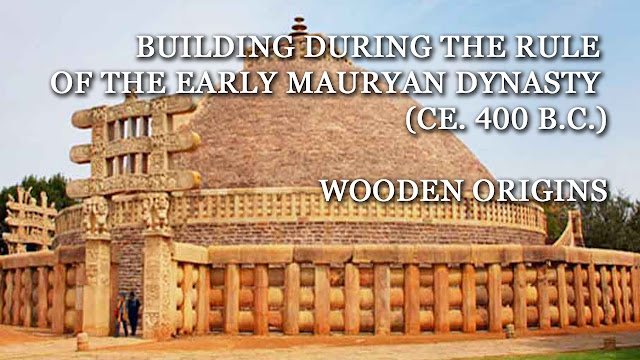 A strong firm government-administered over a large territory usually implies an advance in human endeavor, and with the rise of the Mauryan dynasty towards the end of the fifth century B.C. which established for the first time a single paramount power in northern India, marked cultural progress was made.
Among other achievements the art of building, stimulated by royal patronage, took a notable step forward, as Mcgasthenes’ account! of the Mauryan capital of Pataliputra (near Patna) plainly shows.
This Greek ambassador who resided at the court of the emperor Chandragupta about 300 B.C., presents us with a striking picture of the great Indian ruler’s stronghold.
Occupying a narrow parallelogram about nine miles long and a mile and a half broad, it ranged along the banks of the Ganges like an immense castellated breakwater, surrounded by a stupendous timber palisade, with loopholes for archers and protected externally by a wide and deep moat.
At intervals were bastions with towers, over five hundred in number, and it was entered by as many as sixty-four gates.
Within the walls was the royal palace. evidently a much more spacious and elaborate edifice than that erected by any previous ruler in the country.
The main portion of this imperial residence consisted of a series of hypostyle halls containing pillars of wood each of which “was clasped around with vines embossed in gold and ornamented with designs of birds and foliage in gold and silver, thus excelling in magnificence the famous royal pleasances of Susa and Ecbatana”.
Apart from the picture of barbaric splendor that such a description conveys, in this city with its unending wooden walls and beetling bastions, and in the center the palace formed of golden pillared halls, there are indications that India as represented by the Mauryan dynasty was beginning to look even at this early date to the more progressive civilizations beyond its western boundaries for architectural inspiration.
For the hypostyle hail had long been a feature of the palaces of the Persians and Polybius (x. 24) remarks that the columns at the courts of Ecbatana were of cedar and cypress, “all covered with silver plate”, a form of structure and decorative treatment not unlike that which Chandragupta appears to have reproduced in his palatial residence at Pataliputra.
Of the fortifications surrounding this great capital city of the Mauryan empire nothing has survived except fragments of the wooden ramparts unearthed at Bulandi Bagh, near Patna, the beams of which by their size prove that the Greek envoy’s account of its dimensions was by no means exaggerated.
An idea may be gained from the foundations which consisted of timbers laid in parallel lines like railway sleepers each twelve to thirteen feet long, corresponding to the thickness of the stockade at its base.
To these horizontal beams upright posts were tenoned, some of them nine feet high, but it is not possible from such scanty remains to estimate its total height.

That this technical method of timbering was common to other races, widely separated and acting independently, is shown by the same principle being employed by the Romans, as a scene on Trajan’s Column depicts, while Caesar’s description in his “Commentaries” of the wooden walls of the Celts might apply to those at Pataliputra.

“They employ pieces of wood perfectly straight, lay them on the ground in a direction parallel to each other at a distance apart of two feet”, etc.

An upper portion of the Mauryan stockade preserved in the Indian Museum, Calcutta comprises immense teak-wood posts connected by transverse bars, suggesting that it was an enlarged adaptation of the Vedic village railing previously described.
Megasthenes too brief account of the civic architecture of his time is amplified by material derived from another and entirely different source, namely the pictures of various historic towns carved in bas-relief on the Buddhist monuments, which although produced a little later are no doubt substantially representative of the building art at this period.
On the Sanchi gateways as backgrounds to battles and processions, there may be seen portions of such famous cities as Kapilavastu the place of the Buddha’s birth, Kusinagara under the walls of which was waged the “War of the Relics”.
Uruvilva the scene of the serpent miracle, and Rajgriha, the old Magadhan capital. All these towns appear to be of one established type, strongly fortified and surrounded by high walls having battlements with the merlons corbel-stepped after the manner of those in the Assyrian bas-reliefs.

Outside is a moat in which the sculptor with an artist’s eye has floated lotus and other aquatic plants, while the whole is enclosed within the usual railing palisade.
Especially noticeable are the city gates all of which are designed in much the same style, that of the main entrance to Kusinagara carved on the south Torana at Sanchi being so carefully delineated and in such detail that it is possible to reproduce it in perspective, together with its surroundings, as shown in the Frontispiece.
The bas-relief shows a tall entrance pylon, with the gateway defended by a square bastion projecting on each side, the whole of a very serviceable nature yet not devoid of architectural effect.
Near the gateway is what seems to be a formidable angle-tower, while overhanging the walls are pillared balconies, loggias, railed balustrades, and “magic casements” which gives an excellent idea of the romantic character of the Buddhist sacred cities.
No reference to these pictures in stone at Sanchi would be complete without a remark on the figure subjects to which the architecture forms only an artistic setting.
For instance, the royal procession issuing from the gates at Kushinagar with, the emperor Bimbisara at its head might have been the source of inspiration for Blake’slinesin the “Song of Liberty”.