Skip to content
ASOKA, AND THE BEGINNINGS OF THE BUDDHIST SCHOOL (cir. B.C. 250). 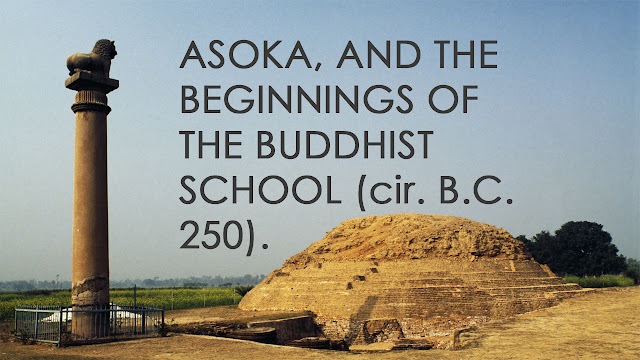 Of the remaining examples of the group, that now called the Gopi or Milk- maid’s cave on the Nagarjuna hill is the largest. It is a plain tunnel-like excavation rounded in plan at each end, measuring 44 ft. long by 19 ft. wide and it is 10 fi. High 1o the apex of its vaulted roof.
Over the doorway is an inscription stating that it was excavated to the order of the emperor Dasaratha on his accession to the Mauryan throne This and two other inscriptions elsewhere are evidence that the school established by Asoka was still in existence at the time of his grandson towards the end of the third century B.C. but after then it appears to have abruptly ceased.
Extending over a period of less than fifty years, this movement had no growth and no decline, so that it emerges not so much as a school but as an outstanding episode in the early history of Indian art.

One and all of its productions are of surpassing interest, and some of them are of a significance which has been rarely excelled.
It also had far-reaching implications as some of its motifs and forms of expression are to be seen wherever Buddhism found a foothold.

For instance, the bell-shaped capital of the monolithic pillars was frequently reproduced under varying conditions but always identifiable as of the “Persepolitan” order.
It was, however, the excavated chapels that were destined to have the most remarkable effect as the examples in Bihar were the beginnings of that magnificent development of rock-architecture which has no equal in any other country.

But even more potential than these material manifestations was the factor of technique. for it put a new power into the hands of the Indian artisans, teaching them how to win stone from the quarry, how to dress and chisel it, and even to apply it to building construction in the form of pillars.
But there, strangely enough, it ended. Of the working and setting of stones, of joining them in courses, in a word of the art of stone masonry, it conveyed nothing.

Suggested: Why Caravaggio is believed to be Prone to Violence, Facts about His Life

The country was apparently not yet prepared for such an innovation. Building in wood had been so perfected that the Indian workman saw no reason for a change.
Evolution does not always proceed by imperceptible gradations but sometimes advances according to a kind of cultural quantum theory, progress being restrained by the very excellence of previous experience.
Some circumstances of a like nature may account for the tardy appearance of stone construction in the building art of India.

Such an expressive architectural feature as the capital, appearing in so significant a form as that devised by Ashoka brings into view the various patterns of capital which figure in the building art of this and the subsequent period.
A series of examples are illustrated in the image below, having been selected to show certain sources, influences, and affinities connected with the Mauryan types. 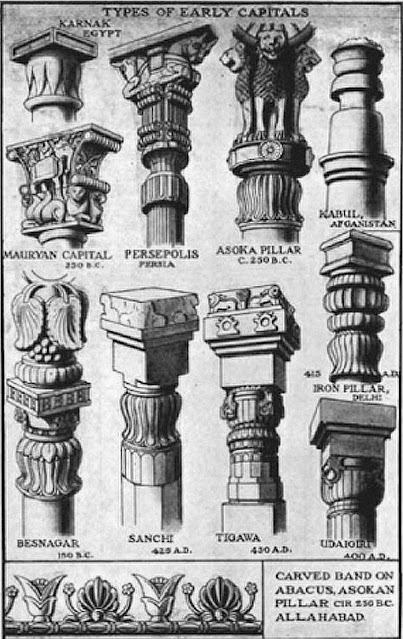 In the image below an attempt has been made by means of diagrams to explain the origin of a motif appearing in a variety of forms, and with marked persistence in all the earlier development of Indian architecture.
This shape, which owing to its fluted treatment is unmistakable, is most frequently found in the capital, but it also occupies a prominent place as a final, as well as a decorative element repeated in the quoins of the sikharas, or spires, of the later temples. 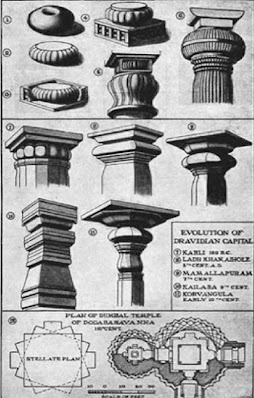 It is a melon-shaped feature ordinary referred to as the amalaka, and popularly supposed to be derived from a common fruit of that name, otherwise known as the emblic myrobalan.
There is more probability, however, that it has reference to the amatasila or “pure stone”, an object which appears early in Indian art, and is of very remote origin.

Suggested: Ten most Famous Landscape Artists in The History of Art

This again brings it into association with the ring or “cogged” stone, those mystical perforated stones which are found among the remains of many primitive people, while its connection with the Norbu or “precious jewel” in the Lamaism of Tibet is also clear.

That it is a relic of some sacred and very ancient ritual is shown by the fact that it is usually represented enshrined in a specially shaped casket.
The difficulty experienced by the sculptor in expressing the presence of the precious symbol in the casket was overcome in two ways, by placing it above the receptacle as in the illustration from Besnagar, or depicting it within a box reduced to a mere framework as at Bedsa.

Later, the fluted treatment of this motif may be identified in many architectural features of the chaitya, vihara, and temple, and it is not unlikely that, blended with the fluted bell-shaped, it eventually emerged as the kalasaor a vase of the Gupta period, as at Udaigiri and Tigawa.
But there are few elements in early Indian architecture which have more remote, sacred, or mystical origins than the amalaka.

Additional light has been thrown on the early form of the stupa hall by the excavations carried out at the ancient site of Bairat in Jaipur State.
Here have been discovered the remains of a Buddhist temple, not rock-cut, but constructed of brick and wood, probably the only one of its kind so far unearthed.

Of its early date, there can be little doubt, as relics of a typical Asokan character were found in its vicinity.
So that it is presumed to have been erected about B.C. 250. Circular in plan and formed of panels made of large wedge-shaped bricks it is contained within a peripteral range of twenty-six octagonal wooden pillars.
Around is a circumambulatory path with a wide entrance on the east leading to the stupa in the interior.
That the primitive stupa hall was probably a circular cell has already been referred to, illustrations of which are shown in Plate VI and there is actually a rock-cut example of the first century B.C. in the Tulja Lena group at Junnar (Fergusson, History of Indian Architecture, Vol. I p. 158). 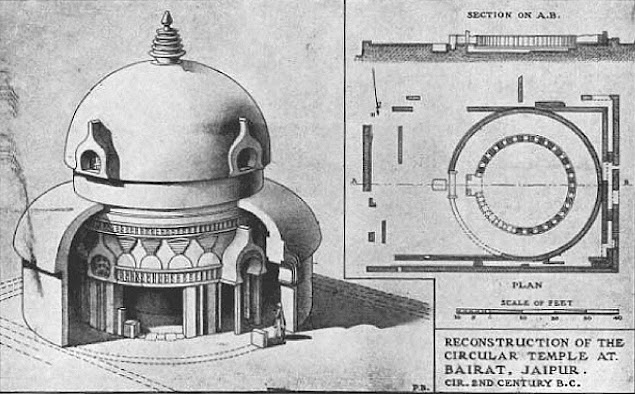 The image above shows a conjectural reconstruction. from the existing remains, illustrating this significant early phase in the evolution of the Buddhist Chaitya hall.
Read About More Topics: